Women with HIV: Time to Talk About Pleasure 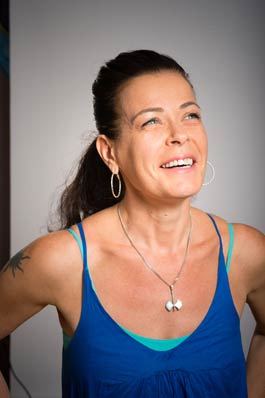 Good sex, intimacy and sensual pleasure are an important part of quality of life, but it is very rare that we give ourselves space to think about them. Sex is powerful. It underlies so much of our lives, who we are, and what we do. However, we seldom have opportunities to talk openly about it. Having HIV, and many of us having acquired HIV through sex, complicates things even further. However, I firmly believe that HIV does not have to be a barrier to a pleasurable sex life. Actually, it can become an opportunity to question the way that we had been having sex in the past, and the choices, or lack of choices, we have faced dealing with sex. Maybe, if we had known how to have open and frank discussions around sexual relationships, and pleasure to begin with, we would have not had acquired HIV in the first place!

However, we cannot change the past: personally, I have had HIV now for over 20 years, and as I ride the roller coaster through the menopause, I would like to hope that there are still good times ahead of me! At 51 I do feel more assertive and in control of my life, my emotions and my body, then when I was in my 20’s or 30’s. But I still have to face that sex, pleasure, and especially female pleasure, in our society, and across many cultures, have been a taboo subject for a long time. Women’s social value and morality have often been measured through sexual control. So, as young women, we were asked to be virgins, or at least chaste or ‘not promiscuous’, while men were encouraged and admired for having many sexual partners. Those double standards, and the sense of being judged on sexual behaviour, still affect me and many other women.

Sexual control, and limitation of female sexual pleasure are among the main reasons behind repressive and coercive practices such as Female Genital Mutilation (FGM), which very often not only make sexual pleasure impossible for women, but can also cause major physical and psychological problems. Luckily FGM is now recognised as a form of violence against women and girls in the UK and is illegal.

Our ideas and feelings around sex are also affected by pornography. Most sexually explicit images we have access to are often from pornographic films that cater for male desire, and objectify and demean women.

Sometimes I wonder if there is a subconscious fear that if we were able to freely access liberated, mind shattering, earth shaking, freeing, unbounded, pleasure… we would all give up our day jobs, leave our families and our responsibilities to dedicate our whole being to the joys of sex… and the whole capitalist society would fall into pieces… I cannot help but think that there is still something quite radical and subversive in sexual liberation.

Anyway… when I was diagnosed HIV positive over 20 years ago in Italy, I didn’t receive any advice, suggestion, or space to talk about sex. It was almost implicit that since I had HIV, surely I should stop having sex! Who would want me, anyway!? And how could I consider to even risk exposing someone else to HIV?!? However, of course, being human, and only 30 years old… I still wanted to have sex! HIV, of course, doesn’t stop us from being sexual beings! Luckily when I came to London, the HIV clinic provided me with plenty condoms and lube and a pat on the back to encourage me to access women’s group at Positively Women. It was within women’s group that I started to feel I had a right to sex and also started to learn from other women living with HIV how to get about having sex with HIV. How to talk to my partners, how to negotiate condoms etc. It was the living example of other women, that gave me the confidence and skills I needed, so that I could also have a sex life, and a relationship, if I wanted one.

At that time Positively Women produced a booklet called ‘Sexual Healing’ where women living with HIV spoke openly about sex after an HIV diagnosis, and how they continued to claim their ‘rights to pleasure’, as HIV stigma was at its highest. I feel very proud that in spite of the incredible stigma around HIV and AIDS, during those years, I, and many other women, just went on and simply loved, enjoyed sex, formed relationships, broke up, started again, and some of us even had a few babies! All of this in spite of often being considered outcasts, ‘infectious’, and dangerous women. We carried on with our lives and quietly fought for our right to be human… which included the right to sex, pleasure and happiness.

Times have moved on; in the past few years we have learnt that actually, once we take ARV treatment and the virus is undetectable, we cannot pass on HIV. This July in Paris the International AIDS Society launched the consensus statement ‘Undetectable = Untransmittable‘ (also known as U=U) which has been supported by leading HIV scientists and over 280 organisations from 34 countries. It is absolutely fantastic that we now live in an era in which people living with HIV can finally feel free from being considered a threat to a sexual partner. However, I know that a lot more needs to be done to enable women living with HIV to have good sex lives. At Positively UK we use a ‘How are you? Questionnaire’, to find out how the people we offer peer support to are doing in all areas of their lives. As part of the questionnaire we also ask about sex life. We have started to notice that among women, especially older women like me, satisfaction around sex and relationships is extremely low. We don’t know why for sure, so many things could be at play: from the prevalence of intimate partner violence, to poverty, from the menopause, to the impact of stigma, and living with other chronic conditions on top of HIV etc. There may be so many reasons why so many women with HIV are not having the good sex and pleasure they deserve.

This is why Positively UK is running Between the Sheets, a one day event for women with HIV to explore issues around sexuality and pleasure. We hope that through the workshops on offer throughout the day to provide an opportunity for women to talk openly about sex and pleasure in a safe environment. To learn, or re-learn, about our bodies and minds, and what turns us on. To discuss self-love and creativity as avenues to pleasure; and of course also to have much fun and laughter, in the spirit of sisterhood and friendship!

Saturday 30 September  – 10:30am to 6pm at Positively UK, 345 City Road, London EC1V 1LR
Crèche available.
Travel expenses for people on benefits of with no recourse to public funds
Places are limited, please book by emailing Hrogers@positivelyuk.org or Donyango@positivelyuk.org.
Between the Sheets events were started in 2012 by Sahir House in collaboration with Community Health in Liverpool, to offer women living with HIV a safe space to explore issues around sexuality, intimacy and pleasure. Positively UK is proud to carry on this legacy!