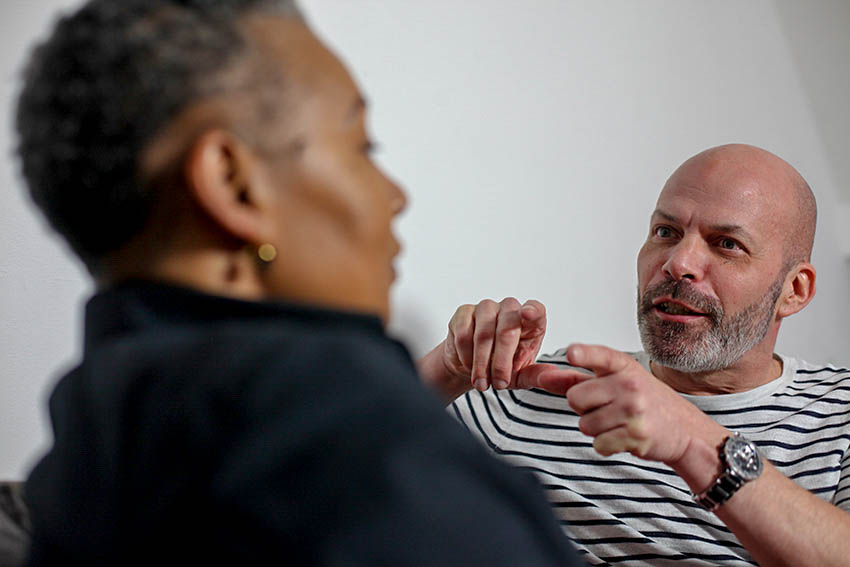 Dear Jim,
Since I started treatment and got to undetectable I’ve felt a lot better about meeting guys and having sex again. But because I know I’m not infectious, I’m not sure whether I need to tell them about my HIV.
What do you think?

Great to hear you’re feeling back to your old self. When we become undetectable and realise we can’t transmit the virus to anyone, we start to get our ‘mojo’ back and that does wonders for our confidence and self-worth. Meeting and dating guys can be difficult at the best of times, regardless of our HIV status, so removing this one complication makes things a whole lot easier.

But like so many things in life, there’s always a flip side. Living with an undetectable viral load places us in an odd position. On the one hand we should stay perfectly healthy if we take our meds, but on the other we’re not actually cured. We’re still HIV positive men. A friend who was diagnosed many years back recently told me that in the old days you would disclose your status to a guy you liked because you wanted to give him a simple choice. A choice as to whether to sleep with you or not. Because in those days there WAS a risk of passing on the virus. If he didn’t want to get involved with you or do the business then you wouldn’t like it, but at least you tried to respect it. Nowadays it’s different. It shouldn’t really be about giving someone a choice based on your status, it’s more about you wanting to open a dialogue, to have the conversation about what it means to have a healthy sex life and relationship. Of course they may not want to sleep with you for other reasons, but if it’s because of your HIV when there is no risk of passing on the virus then it makes it harder, in my view, to respect them.

Having the conversation though, starts by having it with yourself. We all need to think through whether we will tell someone, when and how we do it and how prepared we might be for the reaction. If it’s just a hook up or a one-night stand, I don’t think there’s necessarily the need to disclose because you’re not exposing him to any HIV risk and having ‘that’ conversation can be a bit of a passion killer. But if he then later asks you, you need to be clear what you’re going to say because it’s hard to predict how someone might react if you disclose to them only after you’ve had sex. Personally, I almost always disclose because I prefer to lay my cards on the table and for both of us to go into things with our eyes open. This way we both feel more relaxed and there’s better connection and chemistry.

If we do disclose, say in a dating situation, a common question I get asked is when best to do it. Do we break the news when we meet someone and get it out the way so as not to waste time barking up the wrong tree? Or do we wait until they’ve got to know (and hopefully like us) a bit better and then be more likely to overlook the issue of our HIV? Of course the risk of waiting is that we may then be open to accusations of not having told them earlier. Personally, I think we do ourselves down if we wait too long before we say anything. Think about it. What are we telling ourselves if we start from a position where we feel we are ‘damaged goods’ and that perhaps they’ll ‘overlook’ our status once they’ve got to know us? Isn’t it better to go on a date feeling sexy and confident? After all, we’re doing our bit. We’re on treatment, we’re undetectable, we’re looking after our health. We should be proud of that!

Of course he may react badly, or show high levels of ignorance. If this is the case, start off with trying NOT to be defensive. Use it as an opportunity to educate him. Ask him when he was last tested and whether he’s thought about taking PrEP. Find out about PrEP yourself so you can give him the right information (visit I Want PrEP Now and Prepster). If he needs time to think things over, make sure he knows you’re cool with that. More than likely he’ll like and respect you more for this. And if he doesn’t then he’s probably not worth it anyway.

Then of course there’s the Apps. To their credit, many of them now have options around choosing what you say about your status. Not just whether you’re positive or negative, but also whether you’re undetectable or on PrEP. Being upfront about this before anyone even messages you can avoid awkward conversations down the line. This way you can filter out people who might have an issue with your status before they even contact you. Being honest may also lead to more interest from other positive guys and also from other guys that know if you’re undetectable, they can’t catch HIV from you. In short if you’re being honest about your status on line, chances are people won’t think any less of you. I’ve noticed more guys being upfront about their status which is a really good thing, whether we’re poz or neg. Telling the world we’re undetectable or on PrEP isn’t something everyone wants to do, but every one of us that does it makes an important contribution to bringing our lives with HIV and preventing onward transmission into the light and reducing stigma around it.

We don’t have to, or generally always want to, tell the world about our HIV but when we do we’re acknowledging that it’s an important part of our personal story about which we shouldn’t feel any guilt or shame. It’s just one of life’s challenges that are thrown at us, I believe, to make us better and stronger people. But this only happens if we learn to open up, talk about it, and have those better conversations.

If you’ve got a question you’d like answered around living with HIV, please email jfielder@positivelyuk.org