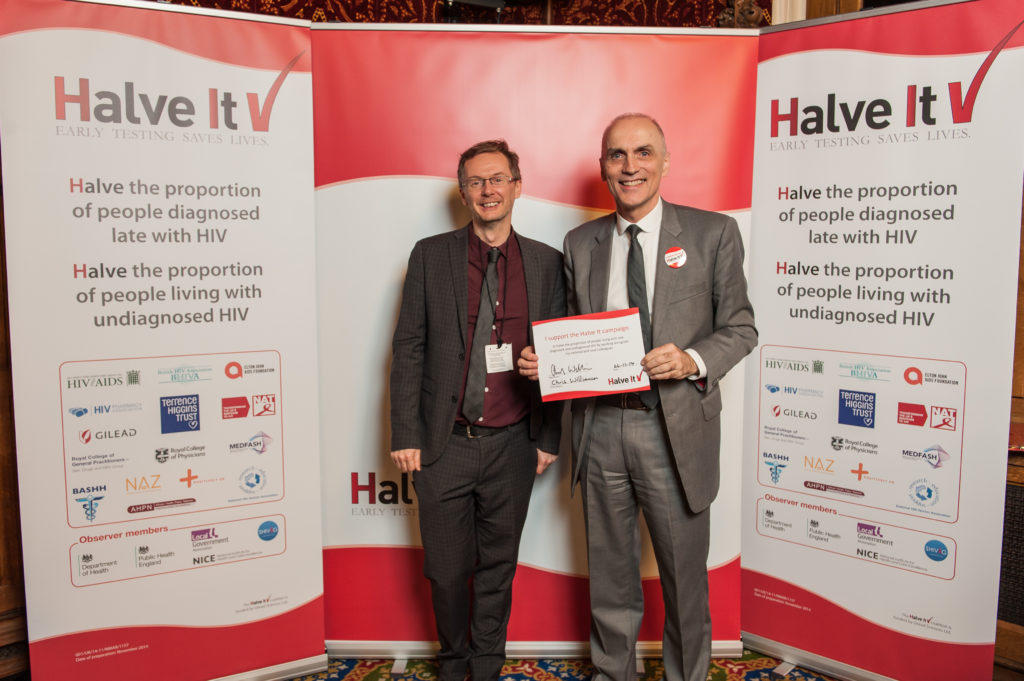 This week politicians of all parties met with Positively UK and other members of the HIV community at the House of Commons to discuss their plans to keep HIV as a priority under the next government. Conservative Party Vice Chairman Mike Freer, Liberal Democrat Health team member Baroness Liz Barker and Shadow Public Health Minister Luciana Berger each spoke on key issues for voters in the HIV community, and outlined how the different parties would address them.

At the ‘Defining Leadership to tackle HIV’ World AIDS Day event hosted by the Halve It Coalition and the All-Party Parliamentary Group on HIV & AIDS, political leaders agreed that successfully combatting the public health challenge posed by HIV required a cross-party approach to keep it high on the political agenda, and that full implementation of NICE public health guidance on HIV testing was vitally important.

25 MPs, Peers and Councillors pledged to support the Halve It coalition in its goals to halve late diagnosed and undiagnosed HIV through national and local action. The event was attended by people living with HIV, advocates, clinicians, community organisations and policymakers, all of whom came together to unite in the fight against HIV, show their support for those living with HIV and to commemorate those who have died. Dr David Asboe, Chair of the British HIV Association, a founder member of the Halve It campaign, described the event as ‘a wake-up call for politicians to take urgent steps and ensure that the policies they have developed to tackle HIV are fully implemented and lives saved across the country.’

Jane Ellison, Public Health Minister, said: ‘I fully support the aims of the Halve It campaign, the Government is committed to reducing late diagnosis and the number of people who are unaware that they have HIV. People living with HIV can expect to live a long and healthy life if they are diagnosed early which is why our sexual health strategy focusses on prevention and testing. We are testing more people than ever, with fewer diagnoses, which shows we are moving in the right direction.’

Halve It is a national coalition that focuses on the expansion of HIV testing services, on the basis that early testing of HIV saves lives and also results in substantial savings to the public health budget. Since its inception in 2010, Halve It has galvanised national and local cross-party support for HIV testing, and is supported in its aims by the Prime Minister, the Deputy Prime Minister and the Leader of the Opposition.

Andy Burnham, Shadow Secretary of State for Health, said ‘Much more needs to be done to tackle HIV in this country. Everything from awareness around prevention, to early diagnosis, treatment and care. A key part of the solution lies in collaboration across stakeholder groups, nationally and locally. The Halve It campaign is an excellent example of local and national organisations and individuals uniting around an important issue and driving change.’

Halve It is a coalition whose members represents third sector and clinical groups including Positively UK.